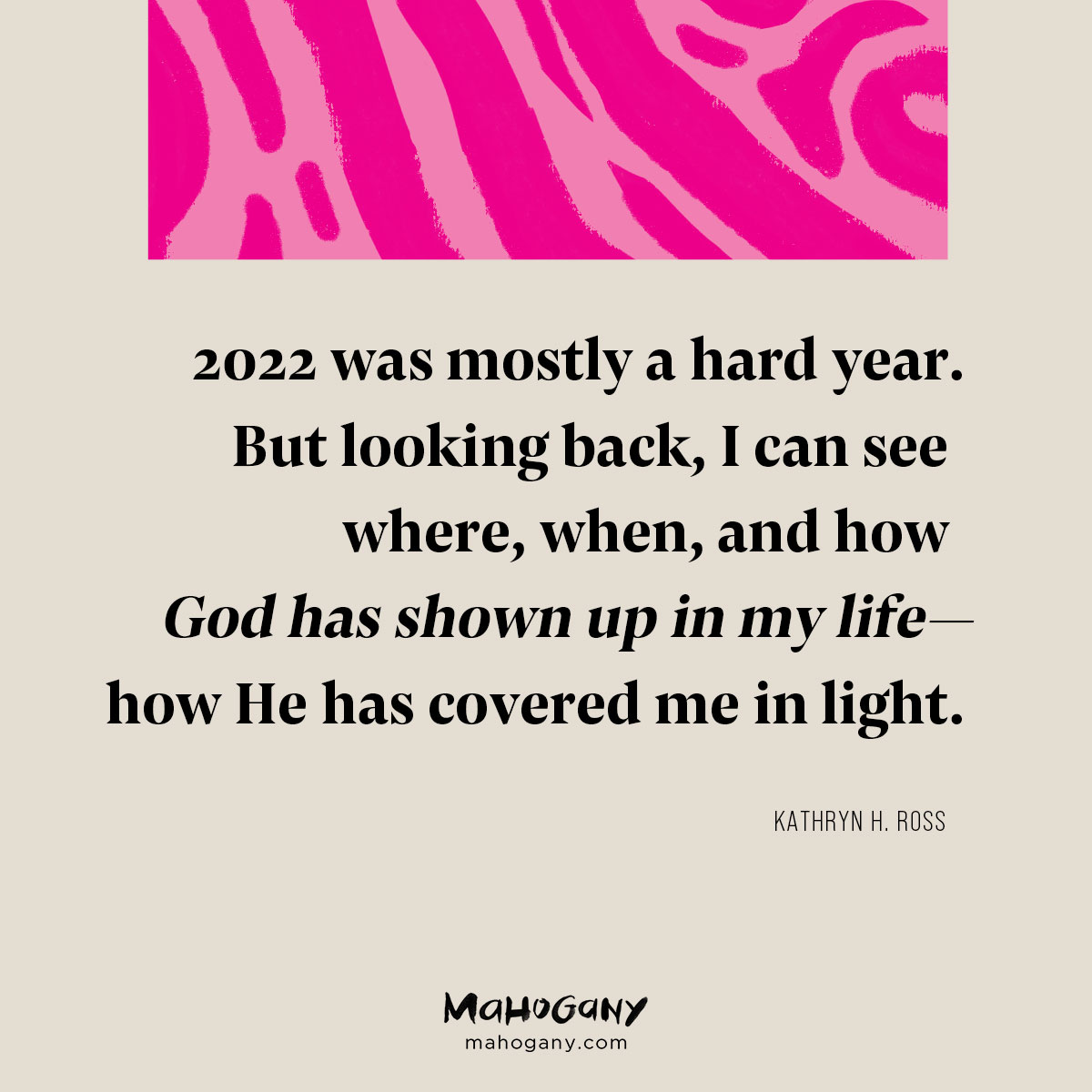 My first article of this year was encouraging myself and others to head into 2022 with an increased awareness for moments of “light”— happiness, goodness, peace, calm, and positivity. These moments didn’t have to be significant or groundbreaking. They could be as small as a smile or a hug, meeting a friend for coffee, or listening to a new album you were excited about.

Now that we’re at the end of 2022, all I can think is: How well did I notice the moments of light in the last year? What stood out to me? What made the world feel safe and small? What made me feel like I mattered? I’m still taking stock of everything (it’s been a long year after all), but I’m delighted and humbled to find that the list I’m compiling is long and my moments of light many. The truth is, 2022 was mostly a hard year. But looking back, I can see where, when, and how God has shown up in my life—how He has covered me in light.

In the first quarter of the year, I took on a new client outside of my comfort zone, and for a few months I was writing about foreign affairs. The team I worked with was one of the nicest I’ve met in my career. As we worked through our contract, I learned so much about politics, global relations, the goings-on of other countries, and history. I developed a useful new skill and had my mind opened to a corner of the writing world I’d never been to before.

This client found me via a recommendation (which is always exciting), and the experience was so positive. When that season came to an end, I left feeling like my world had brightened. I’d learned a lot and gained a new perspective on how connected the world really is—how much our actions really do affect one another. From this review comes a new resolve: I want to keep learning about things and people well beyond my scope of life.

In February, I learned the publisher of my first book would be shuttering its doors and my work, my baby, would be out of print. This thing that had been existing and thriving outside of me for nearly three years was suddenly cut loose, bereft. To say I panicked is an understatement. For months I researched, weighed options, and made plans, but it didn’t feel right.

In June my book went out of print. In July I signed a contract for it to be re-released as a second edition with a new publisher—one I’d interned with four years prior. Even after my internship, we’d remained friends, so during my months of research I reached out for some direction. I asked for some pointers on self-publishing and advice for when your baby no longer has a home. That turned into a rebirth. From this review comes a new resolve: I want to remain open to the unexpected. I want to allow myself to be pleasantly and totally surprised.

Also, in June, my grandmother got sick. Like, in-and-out-of-the-hospital, in-need-of-surgery sick. In all my life, I don’t think I’ve seen her have so much as a cold, so this was terrifying, devastating, totally new territory. What followed were weeks of trips to the hospital, lots of prayer, lots of waiting, and lots of worries. I’m blessed to say that she’s so, so much better—recovered and almost back to her normal self, praise God. But in those weeks light spilled in from everywhere.

Suddenly, I was at her house all the time, more even than when I was a kid. I was helping care for her, and during that time we were bonding—deeper than we ever had before. I sat in bed with her and asked about her wedding day, what it was like growing up with eight siblings, her old nicknames, her old pets, what her parents were like—stories I’d never heard. She said she’d never talked so much about herself, but she didn’t stop. I learned that she loves to draw like I do and has folders of drawings on her bookshelf. I learned that she remembers every one of her students and still has her class photos from decades past.

We talked about dating and books and silly celebrity crushes. I watched more baseball with her than I ever have in my life. I’ve always had a good relationship with my grandmother, but this summer and fall we developed a level of closeness I’ve never known. I was meeting for the first time someone I’ve known my whole life. From this review comes a new resolve: I want my relationships to keep going deeper. Especially with the people I’ve known forever. There’s always more to know, say, and do—if we only make and take the time.

These are just a few moments of light in my 2022. What has been a hard year was not a bad year, and that makes a difference.

Where have you found the light this year? And what have you learned?

I want my relationships to keep going deeper. Especially with the people I’ve known forever. There’s always more to know, say, and do—if we only make and take the time. -storytellerkath