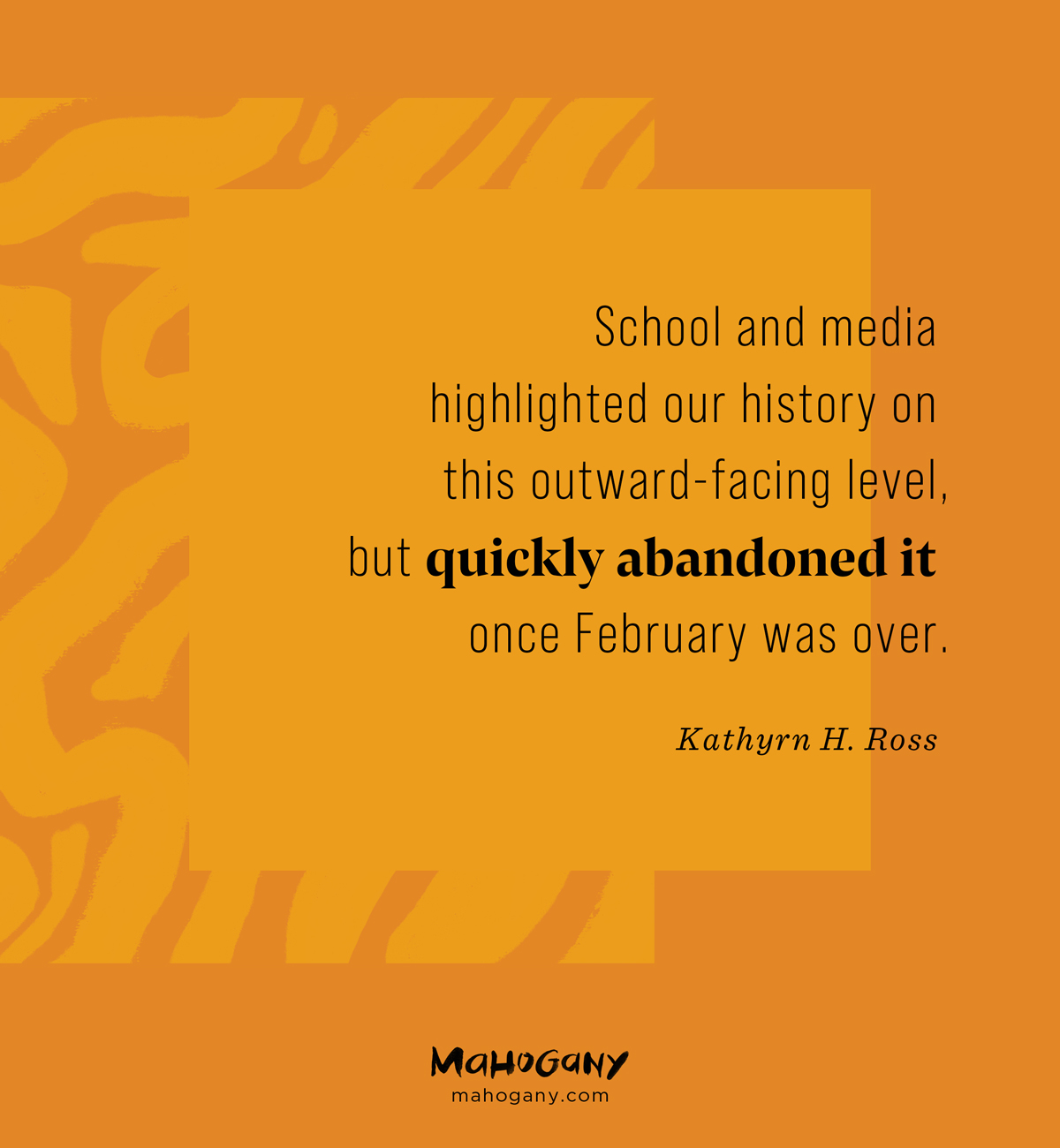 When I was little, I was proud. I loved learning about my people, and I wanted to join in by contributing whatever I could to the conversation. One of my favorite movies was Our Friend Martin, an educational adventure about Martin Luther King Jr. and his impact on the world. I had it on VHS, and my sister and I watched it as often as our Disney movies. When I got into grade school, every year without fail I would proudly tell my teachers about it, and they’d ask me to bring it to class. I thought it was so cool: we got to watch a movie—my movie—and we got to learn about something extremely important.

But one year as I made my pitch, I was met with eye rolls and groans from my classmates. They were tired of it. They’d gotten all they could out of it, and frankly, it wasn’t that interesting. I can still feel the mixture of shock and embarrassment in my body. After that year, I never mentioned Our Friend Martin again.

Then as I got older, I began to stifle myself. I was about as interested in Black History Month as my classmates had been (and also a little ashamed). Despite my parents taking us to festivals and fairs most years to celebrate and learn, I often felt out of place and the whole month seemed…performative. School and media highlighted our history on this outward-facing level but quickly abandoned it once February was over. To me this seemed more like a box checked than actual appreciation—like something everyone had to show care towards, but that few beyond people like my parents and grandparents actually cared about.

I didn’t have a deep dive into Black history until junior year of high school while preparing for my AP US History (APUSH) test. My teacher covered everything from the slave trade to our first Black president in excellent detail, condensing some 400 years into a couple of weeks. No one else seemed all that interested, but for the first time, I was hearing stories and learning about figures I’d 1) never heard of before or 2) never fully appreciated before. It dawned on me how much of Black history I’d been missing. Ten years of schooling and the most I’d gleaned was that slavery was bad but now in the past, MLK Jr. was a hero, and George Washington Carver invented peanut butter (a claim that it turns out, actually isn’t true).

I didn’t question the lackluster history lessons I’d grown up with because they were all I knew, and I didn’t expect more because no one seemed to want more. I trusted my teachers and my schools. As they were my whole world, they reflected reality. This led me to think, subconsciously, that yes, Black history was important, but only for the one month of interesting factoids that apparently weren’t always accurate.

Fast forward to two years ago: I wrote a piece about Black History Month and Morgan Freeman. In a 2005 interview, Freeman claims, in short, that Black history is American history and should be treated as such, not delegated to just one month of special attention. He went on to say that noting our differences (“Black man” vs “man” or “Black history” vs “history”) perpetuated separation, and I agreed with him:

By the time I was 16 or 17, though, Mr. Freeman and I were of the same mind: I often told people I didn’t want to be seen or thought of as ‘Black’ before anything else: ‘Black girl’, ‘Black friend’, ‘Black student’, ‘Black kid.’ I was Kathryn . . . But when I went back and read an essay I wrote in college called ‘Defiance,’ in which I recount a moment when a new friend regarded me only as his ‘Black friend,’ I realized that what I and Morgan Freeman were practicing was erasure.

This realization led me to write an essay. That essay was soon published and is now an integral part of my book. I see now that the erasure I practiced was not inherent but learned. Erasure happens that way–in plain sight–and it often looks and feels normal. From the disinterest of my classmates to the low-energy lessons in school, I got a message about Black history that burrowed deep. I’m hyper-aware of how and when I practice erasure now, and it’s led me to boldly embrace my Blackness and my history in a way I never did before—because if I don’t, who will?

I’m still unsure if designating hundreds of years of Black history to a single month of awareness is good or enough, but I’m also embracing that any spotlight is an opportunity for more: More education, more understanding, more interest, more visibility, and more empathy.

So, this year I’m raising my voice however I can. If you’ve had a similar relationship with Black History Month, I hope you will too. Because if not us, who?

I’m hyper-aware . . . and it’s led me to boldly embrace my Blackness and my history in a way I never did before—because if I don’t, who will? - @speakthewritelanguage