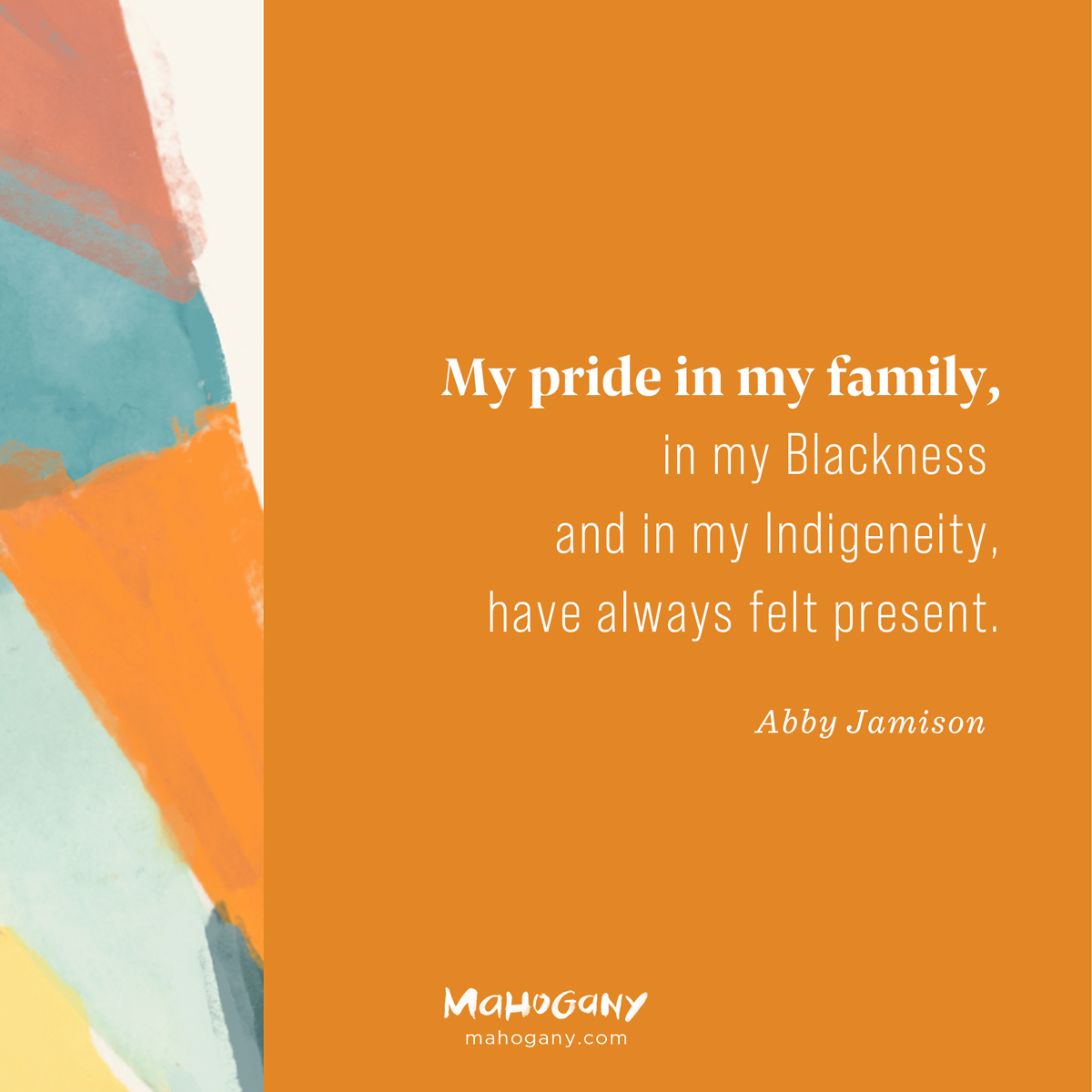 When someone asks, “What’s your ethnicity?” I can give the simple answer: I am Black and Indigenous. Or, I can go more detailed: My mother is African American and my father’s Native American. Or, it can get even more complex: My mother’s family are descendants of enslaved Africans, likely from West Africa, and have been living in North Carolina ever since. My father’s family is Oklahoma Choctaw; they were brought from Mississippi on the Trail of Tears and have lived in or on the reservation ever since.

I’ve always liked giving the full details (maybe TMI) — not just because it makes people squirm a little after asking something as demeaning as “what are you?”, but because I’m so proud of who I am. My pride in my family, my Blackness, and my Indigeneity has always felt present. But the older I’ve gotten, the more I realize that despite my parents’ best efforts, I’m not sure I was always this proud.

I was an avid writer as a child, and my stories always had the same protagonist: a white girl with chestnut brown hair and blue eyes. I cringe at this now. Even though I was a confident little girl who loved her hair and skin and had friends and family that reflected all parts of her, I still fell prey to a world that uplifts whiteness. I didn’t want straight hair and blue eyes, but I thought stories only mattered when white girls told them.

I grew up the way a lot of mixed children do, in between.  Not Black enough for the Black kids, not white enough for the white kids. I found my people regardless, but I became exhausted by the never-ending questions about my race pretty early on. I completely left out my Choctaw heritage because it was too “complicated” to explain. I hated the way some girls called my hair frizzy and asked if I brush it. I hated when boys yanked on my double braids and called me Pocahontas. These aren’t really things I talked about with anyone—not even my siblings. It just felt pointless, because, hey, this is what I look like, so let’s just live with it, right? I did not think or talk about my race, and it stayed that way for a long time.

I saw how the world looked at me, how the world looked at my mother. People would look at us funny, whether I was with my dad, my mom, my siblings, or all of us together. It wasn’t until I was older that I understood why; it was not my white-passing father who made people “uncomfortable.” It was my Black mother. But I know that without her—without Black women—I would not be who I am. I owe them everything. So, before anything else, I listen to Black experiences that are not mine and speak up against colorism whenever faced with it. It’s one way I can honor my mother and all Black women like her.

I have always worn my race on my face. Which is probably why when it came to my queer identity, I didn’t fully come to terms with it until I was older. In 2014 I was a college freshman who’d just left my east coast suburb for a midwestern city school. Not only was I adjusting to college like everyone else, but I was in the midst of my own radicalization. Take understanding my race, throw in questioning sexuality, and the world becomes an even more unwelcoming place. But I’ve been lucky in most of my experiences; things are much worse for so many. I’ve had people around me who love me not despite my sexuality but because of my queerness—because it is part of me.

To be Black and Indigenous is to exist in a world that tried so hard to irradicate you. My ancestors fought just to exist, and every part of me feels the strength of that fight in my linage. To be queer in that same breath feels like the ancestors giving me my final piece of armor. I look at my intersecting identities as armor because they strengthen me and toughen me, but they also shine for everyone to see. For a long time, I looked at all these pieces of my identity as complicated and unfair, like a bad hand of cards; then, I looked at them as meaningless. But in reality, they’re blessings — these are the things that make me, me.

They encompass my strength. How could I not be strong with lifetimes of survival embedded into my history? They encompass my joy. Who I am may not be a choice, but loving who I am? That’s where the joy is. I exist when so many people still believe that I shouldn’t—the stubborn Taurus in me is kind of obsessed with that act of rebellion.

I’ve spent my adulthood trying to make up for the little girl who imagined beauty as light skin and straight hair. Now, any story I write will have someone who looks like me or my siblings, my mom, my grandparents, my aunties, my cousins… Because everyone deserves to not only see themselves reflected but celebrated.

What do you value most about who you are and where you come from?

I exist when so many people still believe that I shouldn’t—the stubborn Taurus in me is kind of obsessed with that act of rebellion. - Abby Jamison 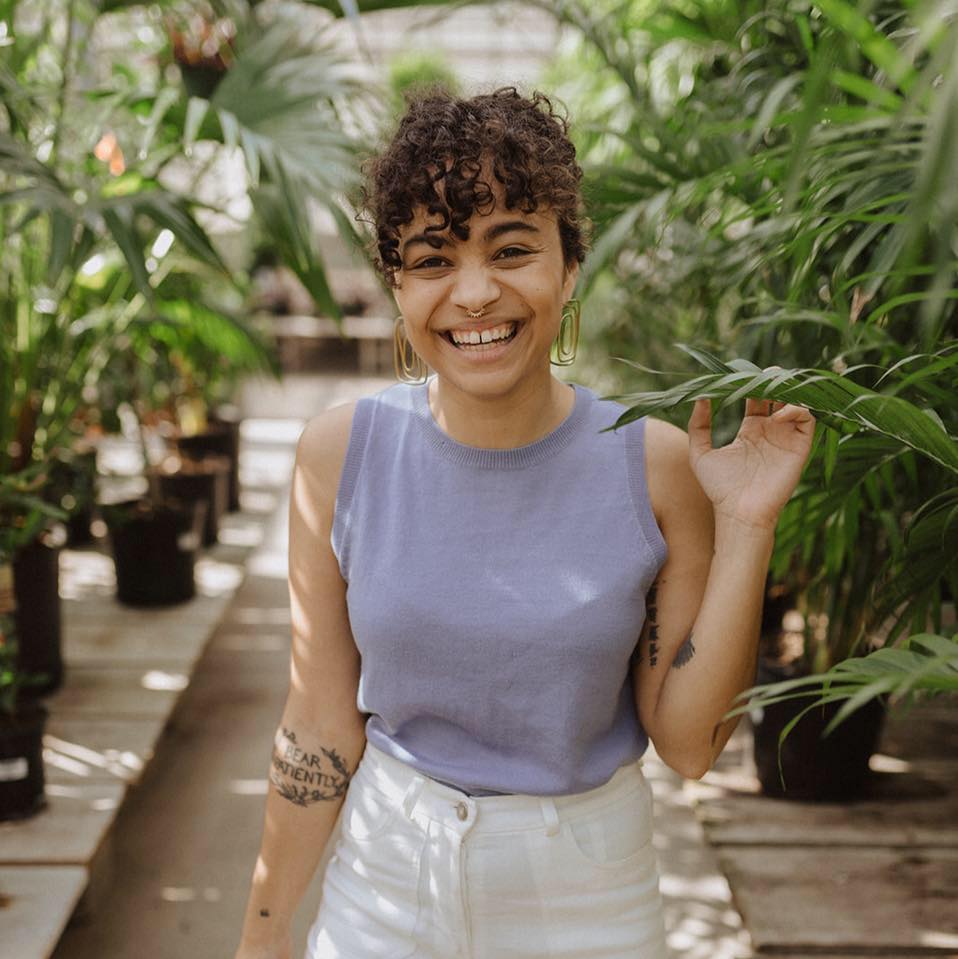 Abby Jamison is the editor for Hallmark Mahogany cards. She is known for her trend-forward thinking and Gen Z perspective. An avid reader of Black literature of all kinds, she hopes to one day write a Children’s book for little Black girls.