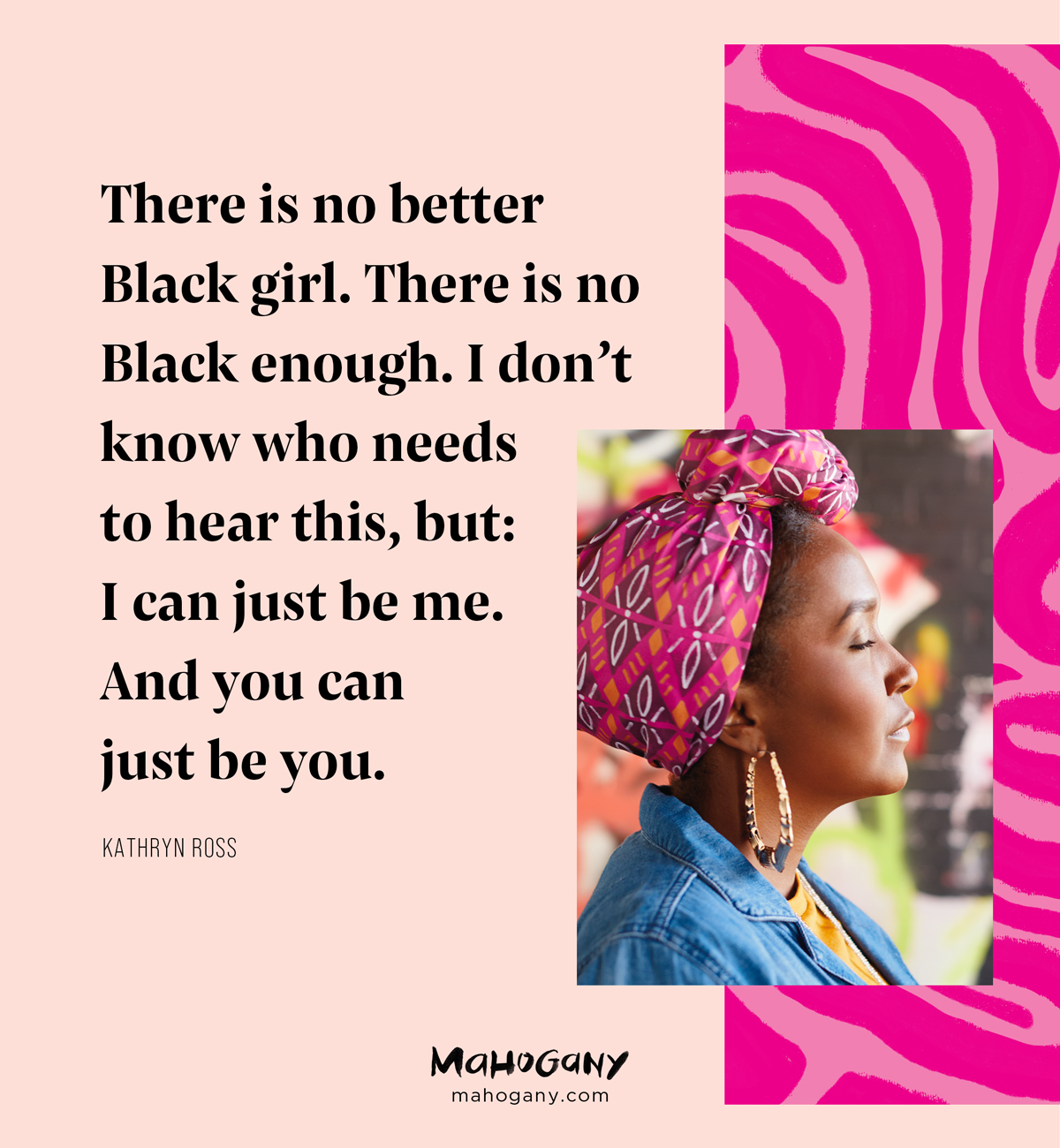 “She’s better at being a Black girl than I am.”

I still don’t know what I meant by that, but I thought this to myself after I’d seen a friend of mine on Instagram put gorgeous locs in her hair.

The first time I tied and wore a headwrap, I texted a friend a picture of my handiwork and said I was “finally a real Black girl.” I still don’t know what I meant then, either.

To put it bluntly: If I were at a party with Megan Thee Stallion, Issa Rae, Zendaya, and Chloe and Halle Bailey, I fear we would have very little to talk about, and they’d find me weird, boring, and off — like someone who just doesn’t get it.

When I come across posts like “Songs Black people should immediately recognize” or “Things all Black people just know,” and I know them, I feel so validated. But when I don’t, I feel like a complete outcast. When I’m talking with other Black people, and we share the look, or when I understand a reference to Black media or culture or literature, I feel a wave of relief and pride wash over me because 1) being understood feels really good, and 2) I’ve done it: I’ve passed the culture test to be seen and accepted as a Black person by other Black people.

This worry over whether or not I’m going to fit in hounds me everywhere I go. And I’m tired. Growing up, I heard it all: you act white, you talk white, I don’t think of you as Black, you’re not really Black, and the crown jewel: you don’t want to be Black.

Many of these comments were predicated on how my hair looked, the way I spoke, the things I was interested in as a kid (folk music and rock and roll, sci-fi and fantasy novels, Tim Burton movies, and anime), and the things I was not (Hip Hop and rap, dancing, basketball, pop culture). I’m not sure what made these things “Black” or “not Black,” but time and again, what I liked fell into the latter category, and the message became increasingly clear to me: I am not Black enough.

That message sank deeper as I grew up. Once a non-Black friend told me, “Sometimes I wish we could switch. I’d be a way better Black girl than you.” When I asked why she shrugged. “I wouldn’t straighten my hair, I’d wear a huge afro, and I wouldn’t be so shy. I’m already loud and bold… plus, I can dance.” I didn’t say anything back. I wasn’t bold. I did straighten my hair. And reader, I’ve never been able to dance.

I didn’t have many Black friends because it seemed like the other Black kids and I didn’t have much in common. My friends didn’t see me as a Black person because I didn’t fit who they saw on TV, whether it was in a music video or an episode of Sister, Sister. Honestly, I didn’t see myself either. But then, I was still a Black person — just not the right kind, cool, or recognizable kind.

For a long time, I told myself that my being Black didn’t matter because it wasn’t all of me. But my identity felt split: On the one hand, I have a very strong sense of self. I know what I like and what I don’t. I know what I’m open to and where my boundaries are. I know what makes me, me.

On the other hand, I have no idea who I am. When it comes to my culture, I feel like there’s something a Black girl is supposed to be, and I am not that — and everybody knows it. So, I tell myself things like “you’re not really good at being a Black girl” or “she’s a better Black girl than you.” And I don’t know what I mean, but I know what I mean.

So, I’m trying to change my thinking.

I see that the comparisons I slip into are unfair. By deeming another Black woman “better at being Black” than I am, I’m erasing her and myself and placing us both in that stifling box I grew up in. I’m perpetuating my own identity crisis and not giving other Black people the space to be and have the Black experience as they are. We constantly remind the world we’re not a monolith, but I’ve been making us one by qualifying Blackness in myself.

I’m expanding now, being gentler, letting myself alone. I’m silencing the “should’s” and “if only’s” and reminding myself that there are no requirements for being Black, and there have never been.

When I watch classics like The Fresh Prince and Living Single and A Different World, I see these stories and characters. I realize that there are – and there were – shades of me on TV and in film and literature, and not because I’m suddenly some version of a Black girl I didn’t know about before. No, I see myself now because I’m internalizing that I simply contribute to the Black experience by being me.

There is no better Black girl. There is no Black enough.- @storytellerkath