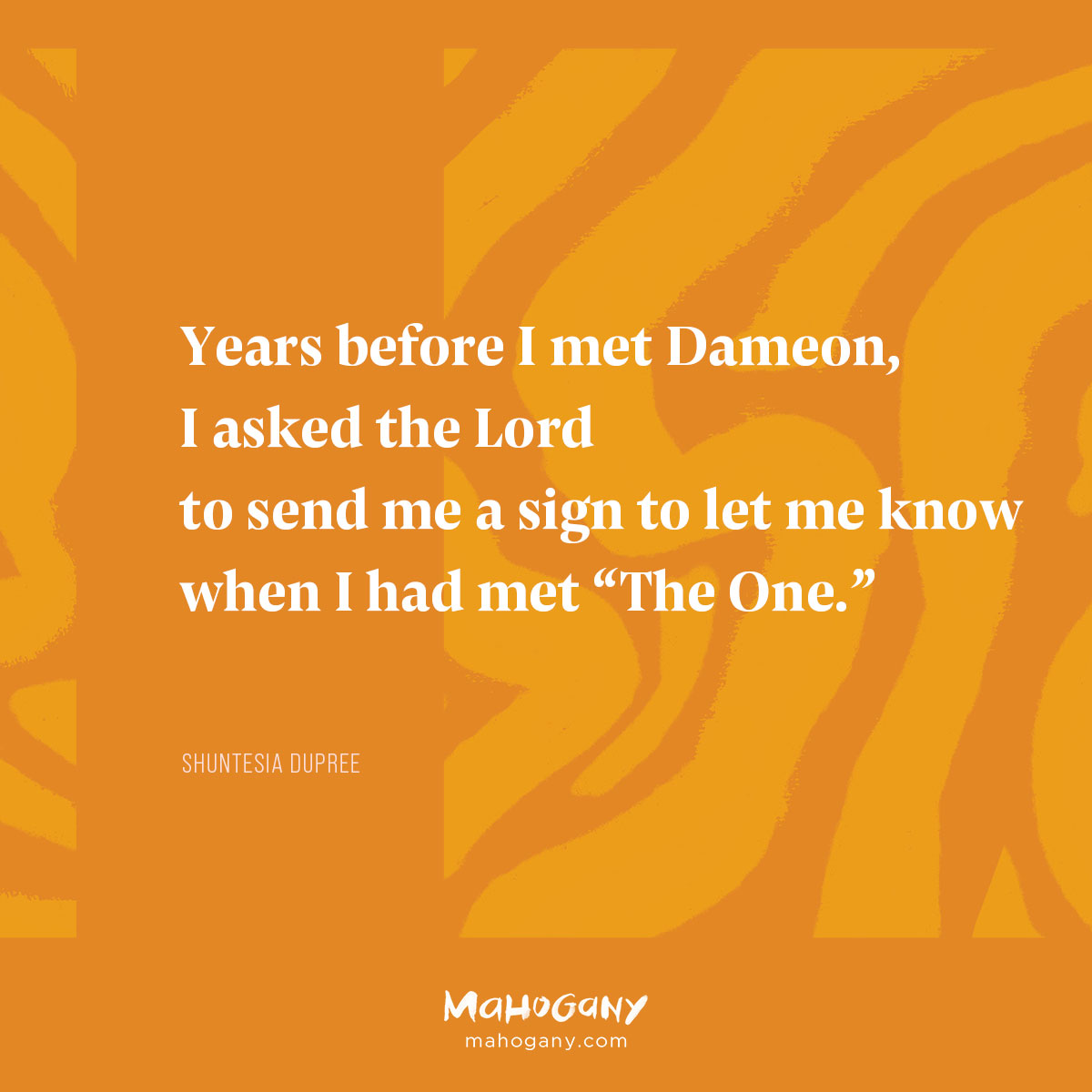 After being married to the same amazing guy—twice, we finally decided we just were not compatible.  I still believed in love and the sanctity of marriage, and I knew I wanted a main character in my life. So, I invested in an on-line dating site subscription. After six-months of ‘interviewing’ (and sometimes being a counselor), I finally met someone who piqued my interest. Dameon was younger than me but extremely intelligent and gorgeous. We shared similar hobbies and beliefs.

Years before I had met Dameon, I asked the Lord to send me a sign to let me know when I had met the “The One.”  The sign was a specific song, and it was to be played in my presence with the man the Lord selected for me. One day, without knowledge of the agreement between the Lord and myself, Dameon was browsing through the television and selected that song. Then he turned to me and said, “This will make a pretty wedding song.” Ever since that moment, I knew he was the one for me. Even to this day, the song only seems to play when he is around.

For six months Dameon and I had a strictly platonic relationship. Then one night, underneath a full moon, he asked if we could date, and I accepted his proposal to be a couple. It was one of the best decisions I have ever made because this heaven-sent man changed me in many positive ways. Dameon and this relationship were everything I had requested from God. But our blessings and our lessons come from Him.

While driving back home late one night, Dameon and I got into a horrible argument. We were so frustrated with each other, we slept in separate bedrooms. And since we are both stubborn people, we did not talk for six weeks. I felt disrespected by him and thought he should be the one to initiate contact. During the six weeks, I even tried logging onto the dating site again, but it refused to grant me access. I could hear my Savior saying stay still.

Then, in church one day, my eyes flooded with tears. I could hear the Lord telling me to forgive Dameon and release the anger. I prayed for patience, love, and guidance; I wanted to be obedient to the Lord, so the next day I thought of a unique way to reach out. I purchased a wine bottle and removed the liquid. I took the bottle to the beach and inserted a hand-written letter. One of our favorite hobbies is photography, so I took a picture of the bottle on the beach and texted it to him. Dameon loved it. I mailed the bottle with the note inside to him. Waiting to hear his response was the longest three days of my life.

Dameon received the bottle and called me. He said it was an extremely sweet gesture. He came over to my house that same evening and we talked. For the remainder of the week we thoroughly enjoyed each other’s company—going to the movies, dining, and shopping. Then my woman’s intuition spiked, and I asked him if he was seeing someone. He responded yes…

I couldn’t understand it. I was hurt and confused; I was sure the Lord had given me specific signs that Dameon was to be my husband. Why would my Savior put me through having to see the love of my life with another person? I jumped out of bed at 5am in a crying rage. I got on my knees and started praying. The day continued, and I just could not shake this helpless feeling. I heard the Spirit say call him over here. So, I called Dameon and asked if we could pray together. Proverbs says:

Trust in the Lord with all your heart, and do not lean into your own understanding. (3:5)

This Bible verse was instilled in me at a young age. Ironically, as a 48-year-old woman, I am just now starting to heed and strongly believe it.

As we were on our knees, I asked the Lord that His will be done in this relationship, and if we weren’t meant to be together, then to release Dameon from my heart and thoughts. Dameon was speechless, but he seemed happy. I felt so much better after the prayer session, like a boulder had been lifted off my shoulders. It didn’t matter what direction the Lord told me to take because I knew He would provide more clarity and I would be obedient. There were times when I felt foolish for waiting for him to come around, but the Lord said, Be patient and be anxious for nothing.

After we prayed, I slept so peacefully—unlike the night before. As I was walking through the house, I noticed someone at my door. It was Daemon. He looked anxious and explained he couldn’t sleep. He said the Lord had laid it on his spirit that he needed to reconnect with me. He wanted to make sure I was aware, but then he had to leave. He needed to go inform the other lady that their relationship was over.

I’m a witness—whenever you have a problem, listen closely to what the Lord wants you to do!

It didn’t matter what direction the Lord told me to take because I knew He would provide more clarity, and I would be obedient. - Shuntesia Dupree 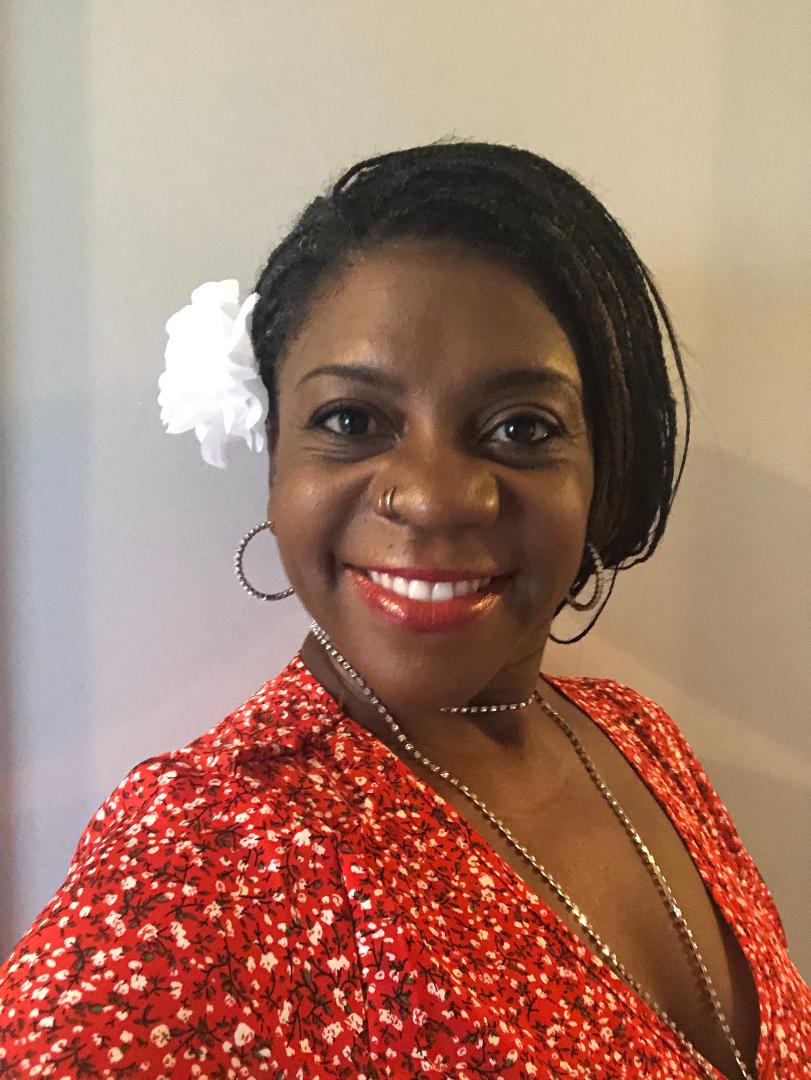 Shuntesia is retired from the United States Air Force after serving 26 years and has two amazing daughters. She is actively involved in community service and is a member of the Iota Phi Lambda Sorority, Incorporated. She also serves as a Life Coach and Motivational Speaker.