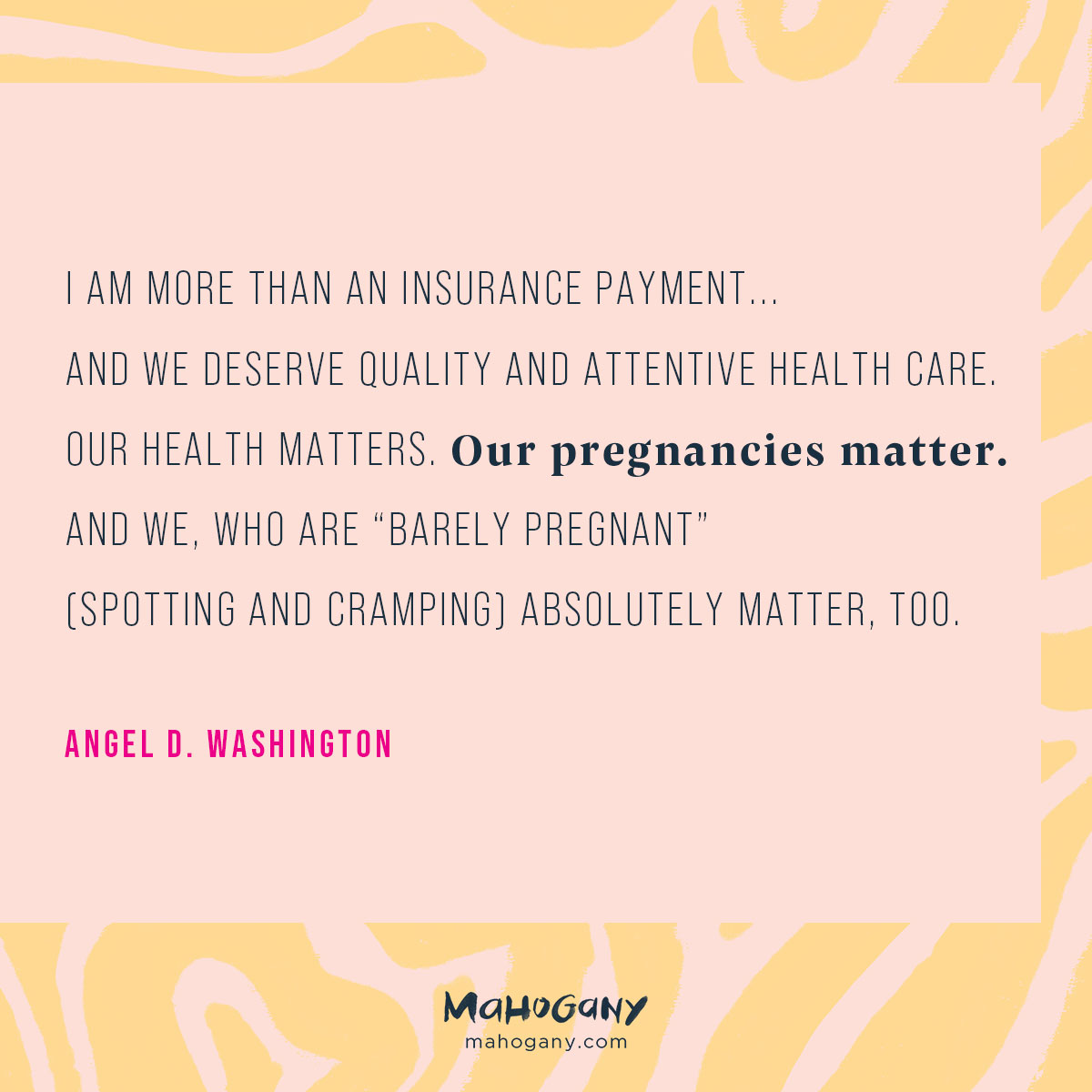 I remember those words from my obstetrician like they were said to me yesterday, so dismissive and callous. It may not have been a huge deal to some, but it certainly was to me. I was pregnant with my second child, and I was heavily spotting and cramping. I was about eleven weeks into my pregnancy and the spotting was persistent. I was excited for the pregnancy, but every day I’d increasingly become more concerned. I’m no doctor, but I know that early pregnancy spotting can be indicative of a few things, such as implantation bleeding, an emergent ectopic pregnancy or—God forbid—an early pregnancy loss.

My doctor, who never had the greatest bedside manner, had delivered my first child 14 years before. While she always presented as thick-skinned, I ignored it, never realizing that I needed to take a stand for the way that I was treated. At that time, I was unaware that so many women of color were regularly ignored and overlooked when seeking care. I didn’t know that Black women were dying at an alarming rate during or after childbirth because many times valid concerns were disregarded. It wasn’t until this experience that I took the initiative to learn about it.

My first pregnancy was very uneventful as it relates to problems—no pain, no spotting, no cramps. Easy-peasy. Which is why all this sudden spotting and cramping was of my utmost concern. This time around, I’d been seen by this doctor twice, between the seventh and ninth week, because of the spotting. By the eleventh week, it was all too often and the cramping began; I just couldn’t ignore it. So, I made another appointment.

Upon arrival, after the normal check-in, I was in the exam room awaiting her entrance. When the doctor finally came in, she casually asked, “So what’s going on, didn’t I see you recently?”

“Oh, is that all?” She let out an annoyed sigh. Then this doctor fixed her insensitive mouth to say, “Well, you’re barely pregnant.” There was silence as she left my “barely pregnant”-self utterly speechless. How dare she? I’d already had an ultrasound; I was very pregnant. I decided immediately that she would never have the opportunity to blow me off again. It was up to me to get my baby here safely and make sure that I made it through childbirth.

After that visit, hoping to never see that woman again, I found another doctor immediately. The new obstetrician was attentive and caring, and as it turned out, I was diagnosed with uterine fibroids. My uterus was riddled with them; they caused me to have an extremely problematic prenatal experience. I was eventually placed on bedrest at four and a half months and for the remainder of the pregnancy. In addition to my regular appointments, I had to be seen weekly by a specialist to be monitored (the fibroids and the baby’s growth). The doctors were unsure if I’d have a vaginal delivery. I was having early contractions relentlessly. The fibroids were growing with my baby, and if he bumped the biggest one when he moved it would cause me excruciating pain.

To make this long story short, I went into labor three days early. At the hospital, after my water broke, I was slow to dilate. They gave me Pitocin and the pain was unbearable, so when the time came, I welcomed the epidural. Eventually they told me that I would have to have a cesarean section because the main fibroid was blocking the birth canal. They rolled me back into the delivery room and guess who was on call and assisting my new doctor? Yup. The insensitive and dismissive doctor who had previously disregarded my concerns.

The cesarean birth of my son was recorded and it captured so much. Aside from the old doctor who doesn’t deserve to be on my beautiful video, it shows my new doctor pulling out my uterus, holding it up to the camera and pointing out every fibroid that caused me so much despair before putting it back. But best of all, it shows me, the woman who was “barely pregnant”, successfully giving birth to the second of my three handsome sons.

Eventually, I had a hysterectomy due to the uterine fibroids. Back then, I was afraid and in pain and that doctor offered me nothing. But she did teach me a lesson: Never again will I ignore insensitivity. Never again will I ignore dismissiveness. Had I allowed her to continue to overlook my worries, what would have become of my pregnancy? I am more than an insurance payment. I am more than a billing address. Sistas, as women we deserve quality and attentive health care. Our health matters. Our pregnancies matter. And we, who are “barely pregnant” (spotting and cramping) absolutely matter, too.

Had I allowed her to continue to overlook my worries, what would have become of my pregnancy? - Angel D. Washington 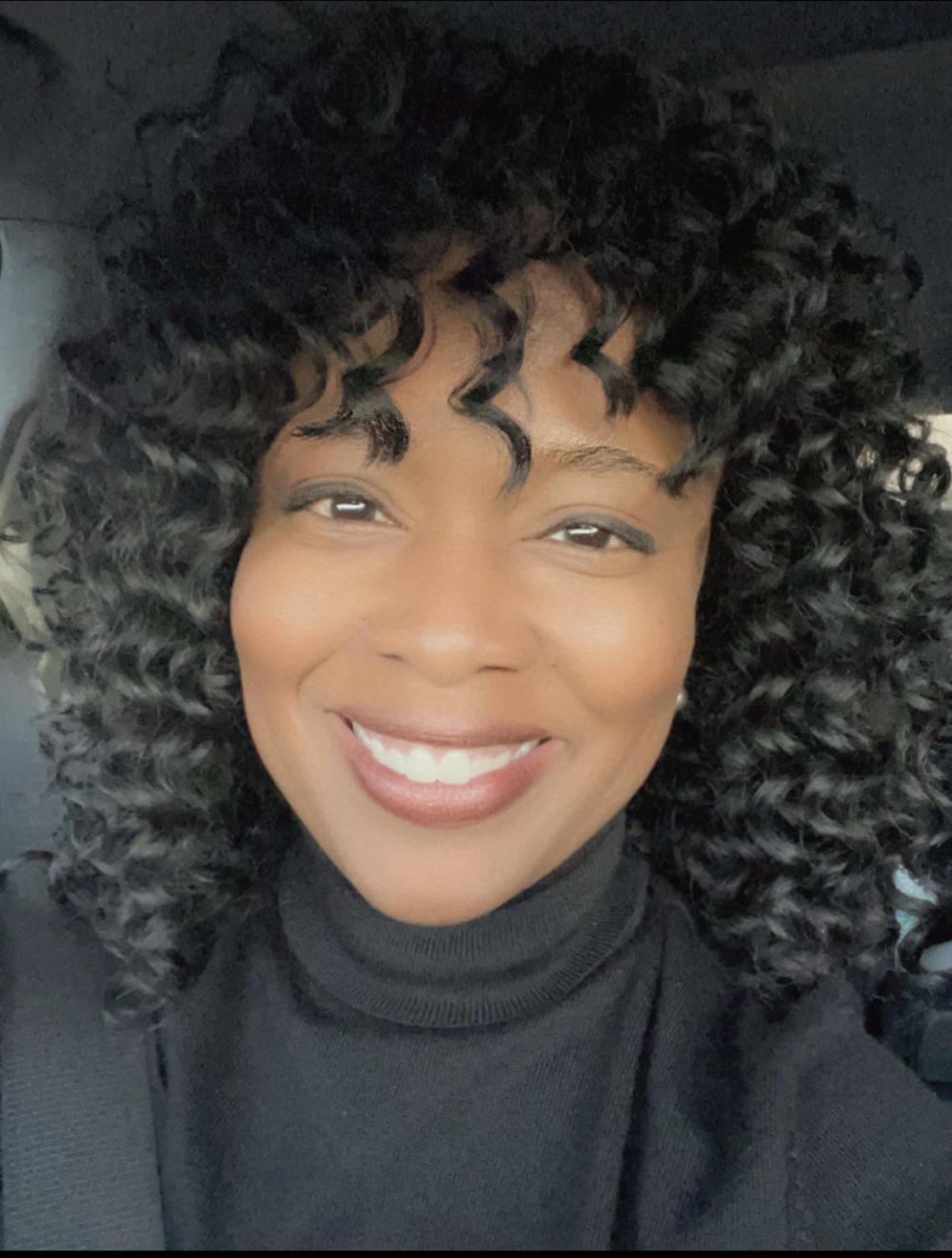 Angel D. Washington is the mother of three wonderful sons and the author of the Always Remember You are Loved book series, which addresses the social and emotional lives of young people. Her goal is to reassure youth that they are loved and supported.